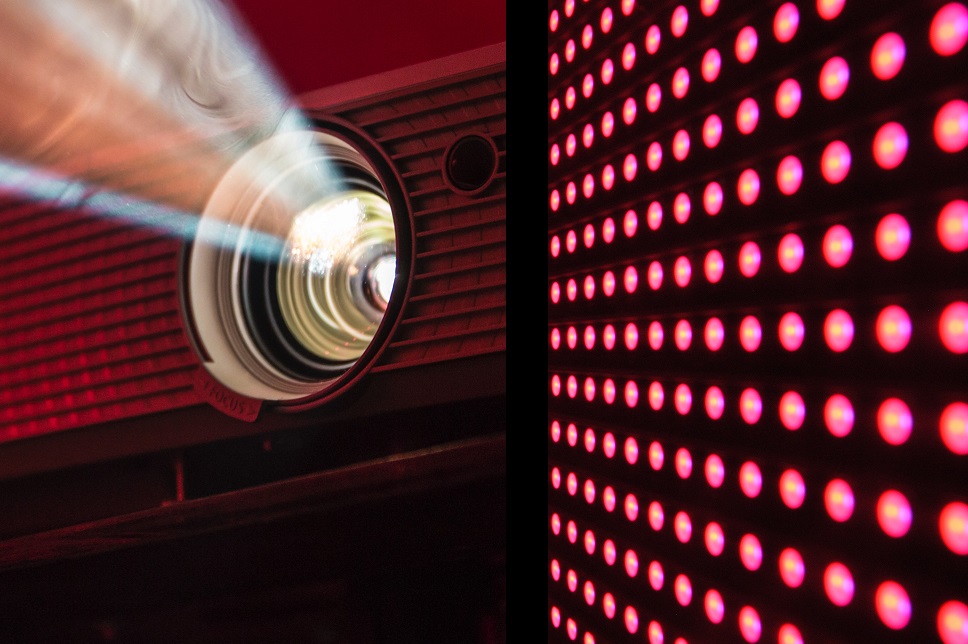 When thinking of digital displays and projectors, it’s likely you don’t see them as tools to be used interchangeably, though in some instances, they can! We throw them into the ring and take a closer look on which one emerges as victorious. 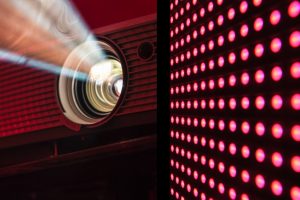 Note that we focus on key defining factors of the two technology types only. It is important to keep in mind there are unpredictable and varying factors, such as specific pricing you run into when looking to purchase a display or a projector, the cost of mounting the technology, etc. Additionally, since projectors cover a larger surface area, some of the points below involve video walls which would comprise of a relatively similar surface area as a projector would. With that, let’s take a look at both!

1. Battle against the light

Ambient light is one of the most deciding factors for choosing between a projector and a digital display/video wall. Simply put, no projector can stand against the intensity of sunlight. Some can put up a bit of a fight; dual projectors exude greater intensity, but none can outshine sunlight. A digital display, on the other hand, can.

Some projectors can push through and surmount certain levels of ambient light, but they work best when the projection surface is bright and sleek in a dark environment. Displays have no such requirements as they have the capability to overpower any level of ambient light and still do their job wonderfully. 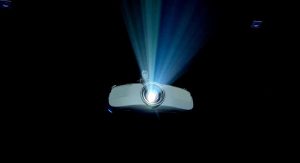 This criterion eliminates the outdoors as a use case for projectors, at least during daytime: a significant feature digital signage has a hold on.

2. The importance of location

Location is important for displays as well, but in a much different way than for projectors. Displays and video walls only need to be visible for their target audience. Projectors, on the other hand, have far greater requirements for external conditions. Firstly, they need a large surface area to project onto in little to no ambient light. And second, there shouldn’t exist a potential of people walking in front of the projector and this way disrupting the image.

Speaking of location though, portability is an excellent asset of projectors – in controlled conditions. If hosting events or attending conventions is not new to you, you’ll find projection hiccups are more spontaneous and unpredictable than for digital displays.

Interactivity is not one of the first ideas that comes up when the topic of video walls emerges. Naturally, video walls can achieve many goals without this feature, but it is one that holds much potential and excitement! Projectors struggle to make interactivity as exciting as video walls do.

For projectors, interactivity is possible through connecting to other devices, allowing people to interact with the displayed image, interaction through social media on a mobile phone for example. But it truly isn’t as engaging or exciting as the interactivity originating from a touchscreen video wall.

4. Cost of equipment and power usage

The initial cost of the equipment is higher for a set of digital displays joined together to form a video wall in comparison with a single projector. However, projectors have a higher fixed maintenance cost as projector lamps burn out faster.

Apart from the cost of the equipment, there is also the long-term factor of power usage. This topic is not as straight-forward to answer since electricity prices are not the same everywhere and commercial displays continuously become more energy efficient. When comparing the power output, the size of the projected image is key, though the differences in consumption are relatively low. An energy-efficient 90-inch display may use around 380 watts per hour. Meanwhile, a projector’s power usage can climb up to 800 watts, though it usually floats around 300. For smaller images, an LED TV would be a better alternative consuming less energy. But as the size of the image increases, power consumption of the two moves closer.

Overall, the costs of acquisition and powering up your tool of choice is losing its importance as a deal-breaking factor with equipment getting cheaper and long-term costs veering relatively close to each other.

5. The purpose of the tool

Now that we’ve listed several key factors, you start to see how each depends on the purpose you try to achieve. Some factors may seem irrelevant to you, while others may act as deal-breakers, ambient light often being one of them. It’s important to have a clear purpose in mind and adapt the factors to that purpose. 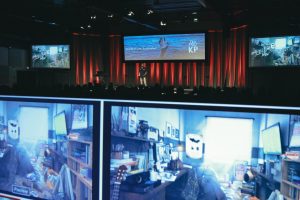 In the case of outdoor advertising, for instance, you’ll find that digital displays take an easy victory over projectors because of sunlight. If high portability is your primary goal, a projector may seem a superior idea. Larger projections are more cost efficient than huge video walls. However, projectors are less impactful on most audiences as they lack intensity, interactivity and are more location-dependent than digital displays.

Ultimately, the here analyzed tools, digital displays vs. projectors, share more differences than similarities. Thus, in certain scenarios, one may fit you better than the other. It is up to you to make that educated assessment.

The Subtle Art of Using Digital Signage in a Coffee Shop