When you publish an On Demand Campaign to Android and Windows Players, it is possible to trigger it by clicking the “Play" icon on the Player in your OnSign TV account, or through an HTTP request. 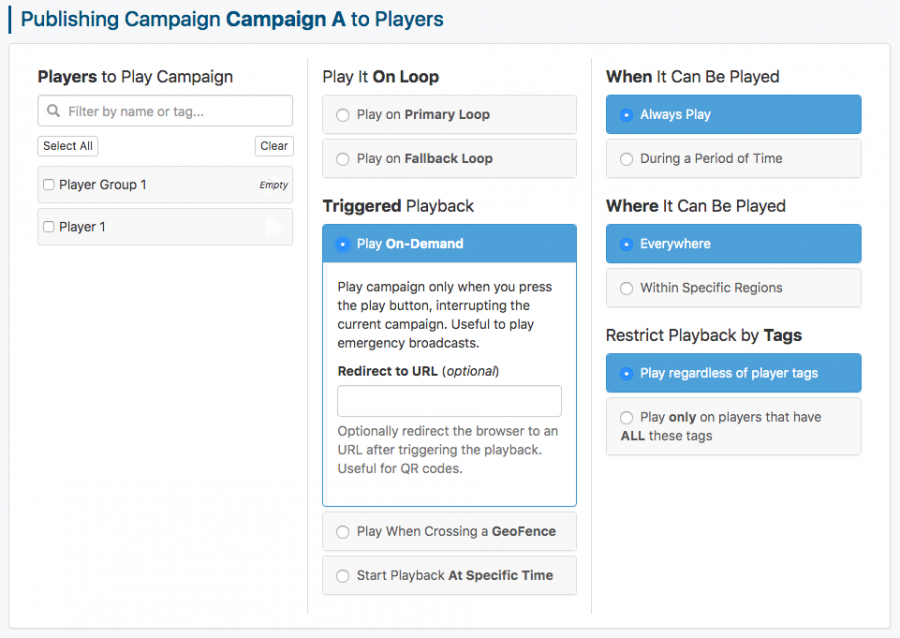 In this tutorial, we explain how to obtain the Campaign On Demand URL and trigger it on screen to desired parameters:

Requesting the URL below will cause the Player to play an item indefinitely (repeat=0), having the parameter info available for the Campaign.

Using the On Demand Queue

By default, the Campaign playback starts as soon as the Playback URL is accessed, interrupting whatever is currently playing, be it either scheduled or other on demand content.

The OnSign TV Android Player version 7.0.3 or greater adds new ways of playing a Campaign on demand, through the action parameter.

Those three actions allow for a myriad of interactions.

Assume a Player has the Campaigns "A", "B" and "C" published on demand, while having two Campaigns playing through the scheduled loop: "X", "Y".

The Player would immediately interrupt the Campaign "X" and start playing Campaign "A", followed by Campaigns "B" and "C".

The player would immediately start playing the Campaign "A", followed by Campaign "X" which was previously interrupted. After that it would resume the loop, playing "Y", "X", "Y", and so on.

Please mind that Campaign "C" would not play in this scenario, because the queue is dropped when action=play.