Electric cars are rising in popularity, this is hardly news as you’ve definitely heard of regular news appearances of Tesla or Nissan’s more widely sold but less infamous zero emission electric vehicles. A sometimes hefty price aside, their growth is unlikely to slow down any time soon. 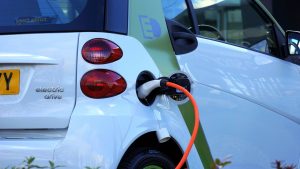 Given the dispersion of electric vehicles advancing further in the transportation industry, a combination with digital signage as a next step feels natural.

We take a closer look at electric cars. What are the opportunities they provide to the digital signage world? Altogether, this will provide insight how both the consumer and the provider of digital signage services can form a beneficial bond.

The riches of car-charging stations

Car-charging stations are a prime location for digital out of home advertising. First, there’s electricity on them. Second, every owner of an electric car will need to charge the vehicle eventually. This creates a perfect opportunity for up-close and personal advertising or provision of content fitting for that consumer. As such, digital signage at charging stations is relevant to the consumer and the advertiser alike.

With estimates of the number of electric cars reaching as many as 220 million worldwide by 2030, car-charging stations and companies which provide them have been mushrooming. The big question is who is going to pay for them. Some say carmakers, others say utility companies or a third party. Volta has a different answer.

San Francisco startup Volta offers vehicle owners free power by turning charging ports into digital advertising. The company’s recently raised $35 million to expand their network. This has helped them claim the tagline, “the largest free electric car charging network in the US”.

By offering free charging stations, they're counting on more electric drivers approaching and using them. Furthermore, by converting those charging stations into outdoor ads, they can charge advertisers in exchange for the benefits of exposure time and an interesting demographic.

Paid or free charging - the verdict is still out

While most customers surely prefer the latter option, it is uncertain which version will dominate. For free charging to make financial sense, the charging station operator and digital signage provider in personal union would need to earn enough advertising revenue to offset the electricity costs. It’s a plausible option, but one which will need to be proven feasible.

For now, many chargers are proprietary and specific to certain car manufacturers. Many don't have a credit or debit card system, cutting off many potential users. Instead they rely on specific payment methods, such as charging cards or apps. However, more and more companies are investing in charging stations, such as Chargepoint, Greenlots and others. Volkswagen plans on investing $2 billion on vehicle-charging infrastructure. The well-known Tesla has its own proprietary Supercharge network as well. Head over to Quartz for more details on the state of the industry.

All features of digital signage apply

What about the content placed on these charging stations? It’s important to keep in mind that charging an electric car isn’t the same as filling up a car which runs on fuel. Charging times take from 30 minutes to several hours depending on the charger used. Hence, there is quite a bit of waiting time involved.

While traditional signage might work on charging stations, digital is most definitely the better solution. Applied to full potential, digital signage can do a lot more than just advertise. Take entertainment for a start, especially with interactivity coming into the mix. Maps and orientation are another source of content a user might look for. Further useful information such as weather forecasts, current events and local points of interest could be included. Above all, these opportunities prove that charging and signage is a natural, comfortable and beneficial combination.

The primary benefit of electric cars is their ability to generate power while leaving less emissions. In an effort to demonstrate this, last year, Volvo used the power of lightning to power their billboard. The ad was set up as a part of the promotion for Volvo's S90 T8 Plug-in Hybrid Luxury.

The electric car industry is still young and facing obstacles. Infrastructure and patterns are not yet fully established. As we have seen, there are options for free charging as are there for paid ones. Neither seems to be the obvious leader yet, given the state of the industry. It’s quite surprising they haven’t been utilized in a more noted way. For example, charging stations at retail locations haven’t become commonplace everywhere yet. This is certainly a matter of who advances the cash. Time will tell, and quite soon from the looks of it as the industry is going to expand faster and further in the upcoming years.